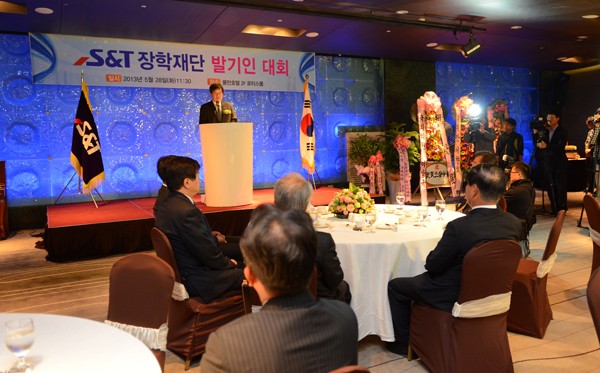 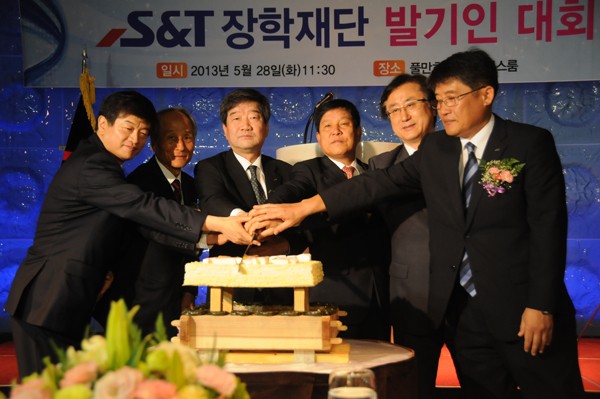 S&T Group(Chairman Choi, Pyung-Kyu) has established S&T Foundation to nurture talent for the future science and technology development according to the enterprise’s business sprit of “Advanced Technology and Patriotism” and “Future Focus”.

S&T Group held a ceremony of the establishment of S&T Foundation with about 120 participants including Chairman Choi, Pyung-Kyu, the board of directors of S&T Foundation, agency heads, representatives of the Media, persons from Commerce & Industry on May 28 at 11 am in Pullman Hotel.

Accordingly, S&T Group will go through an administrative procedure to set up S&T Foundation by submitting a request sheet for the Foundation establishment to the Eduction Office of Changwon in Gyeong-nam area in May.

S&T Foundation is planning to award a scholarship to excellent teenagers and university students from the education alienated class to nurture talent for the future science and technology development by using shares profits from cash investment and distribution profits from share investment.

The director of S&T Foundation, Mr Choi said that “S&T Foundation will be set up to find and nurture global talent who will lead the economy development of the country” and “S&T has led the development of precision machine and will actively award a scholarship to nurture creative and challenging people who will make a technology power country in the 21th century.

He added that “ we all have been experiencing the difficult era due to the prolonged economic crisis since 2008” and “this is the time when enterprises must take the responsibility like CSR(Corporate Social Responsibility) for the future”.

The Group has conducted a variety of education-supporting activities to nurture future talent by providing a “Youth Fostering Fund” and “S&T Scholarship Fund” to elementary schools and universities.

S&T Group which has only focused the field of precision machine industry in Korea, is a middle sized company with a finance size of KRW 2.5 trillion and consists of 20 subsidiaries from home and abroad including the main company, S&T Holdings, and 5 listed companies of S&T Dynamics, S&T Motive, S&TC, S&T Motors

S&T Dynamics(HQ located in Changwon) which invested KRW 10 billion worth of cash into the Foundation, was established in 1959 and the original company in the field of precision machine in Korea, and has produced highly reliable products related with defence industry and power train for commerce vehicle and high precision machine. Researchers of this company completed a test of military Operation for 1500 horsepower 6 Automatic Transmission for K2 tank, which is the exclusive product, and waits for the test results. The sales profits in 2012 is KRW 807.8 billion and the operating income with KRW 50.4 billion and the debts ratio accounts for 37.2 %.

S&T Motive(HQ located in Busan) founded in 1973 and invested KRW 10 billion worth of cash, has produced main parts and products related defence industry targeting global markets based on the precision manufacturing technology. The sales profits in 2012 is KRW 905.1 and the operating income with KRW 34.4 billion and the debts ratio stands for 74.9 %.