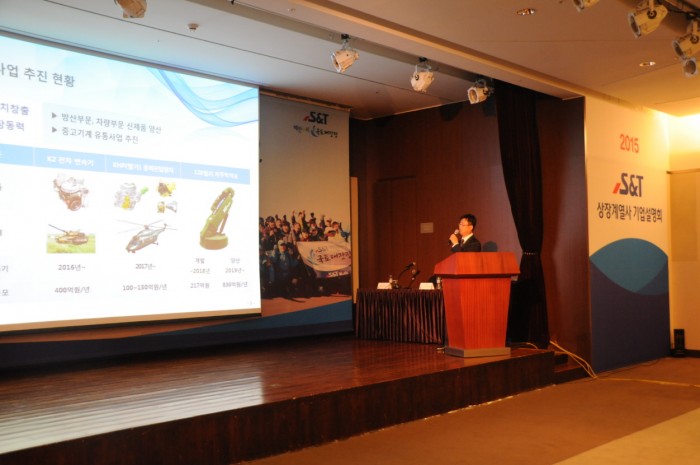 In this invest relation, About 200 people including the chairman of S&T group, Choi Pyung-kyu and other CEOs of affiliated companies, general investors, analysts, and people from media participated and watched the management conditions for 2015 and performance prospect for 2015 were offered.

S&T Motiv said, “With the expansion of high value added products applied to eco-friendly products and high cost of fuel for vehicle and increase in sales of defense industry, it is expected that S&T Motiv will achieve higher than the sales 1.2515 trillion Won and operating profit, 90 billion Won, announced in November, last year and going to continuously grow at about average growth, 15%,

S&T Dynamics also said “According to the profit centered business restructuring, the sales for 2015 year will be 530 billion won, the net income will be 38 billion won and successfully achieve the turn-around.  From 2016, we will get on the full-scale growth track. In addition to this, “With the mass production of new products in defense and vehicle industry and promotion of the distribution industry of second handed machines, we will spur the growth.”

S&TC has emphasized, “With the strategic selective order and strict cost control, the additional sales for 2014 will be 245 billion Won and the operating profit will be 24.5 billion Won.”

The person from S&T Holdings said “S&T affiliated companies achieved more than the management performance in the first quarter, expected by the market.” and “It is expected that S&T companies will continuously grown by restructuring the business and obtaining new orders in order to strengthen the profit.”